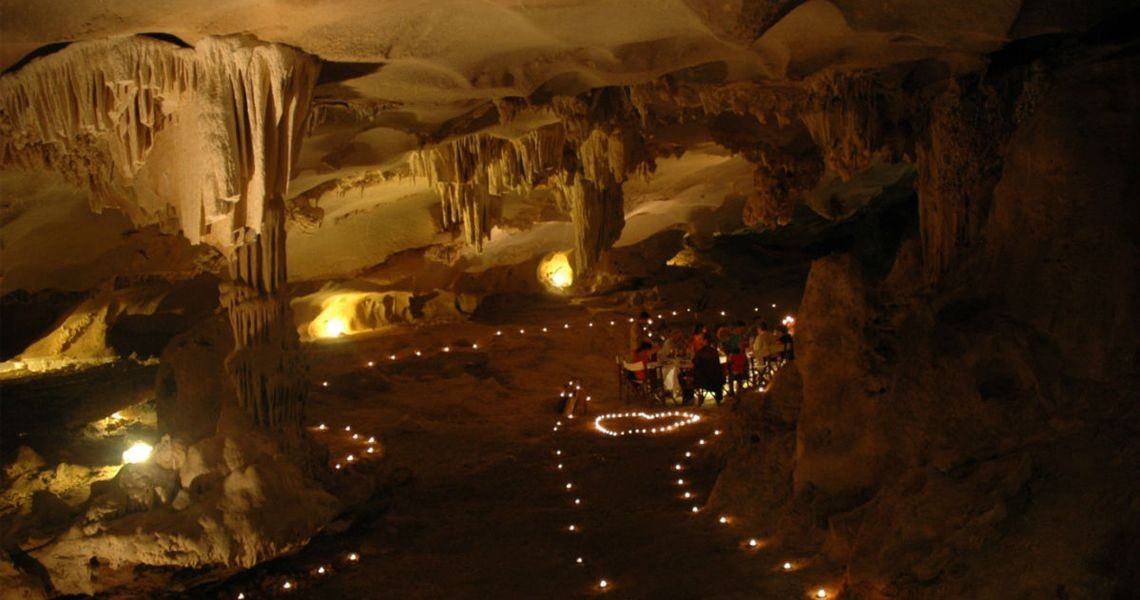 Located on the island range of Bo Hon in the system comprising the Sung Sot Grotto, Dong Tien Lake, and Luon Grotto, Trinh Nu Cave or Virgin Cave is known as the symbol of true love, and is the romantic place for taking the oath of love.

Besides its association with a fanciful love legend, Trinh Nu Cave also remains the site of important archaeological finds in Halong Bay. Many archaeologists discovered the remains of prehistoric inhabitants of Halong culture (about 4,000 years ago) with traces such as ash, bone fragments, and stone in 2000.

In addition, in 2010, pieces of ancient ceramic wharves just in front of Trinh Nu cave, such as porcelain and crockery as well as jars with decorative patterns like ocean waves were discovered. They were identified as belonging to the Tran dynasty (13th-14th centuries) while glazed pottery pieces existing from the more recent Le dynasty (16th-18th centuries).

Finally, based on the results of these discoveries, ones believe that Virgin cave was a small, ancient pottery vestige in the old Van Don trading system. Nowadays, Bhaya Cruises is the only cruise operator allowed to visit the area where Trinh Nu Cave is located, under the special authorization of the Halong City government.

They have renovated and maintained the Trinh Nu area by building a small gangway and stairs for ease of access as well as regularly cleaning the beach. Once visiting Trinh Nu Cave, tourists will admire the poetic beauty of Halong Bay’s otherworldly landscape and mysterious caves filled with nature’s masterpieces, stalagmites, and stalactites before dipping into the jade-green waters for a swim.

You are advised to take some time to sunbathe on the pristine private beach and soak up the atmosphere which can only be felt in Vietnam.

18 Fascinating Things to Do in Halong Bay

A Step-by-Step Guide to Halong Bay

20 Things You Should Know About Halong Bay Overnight Cruise

Indochina Sails is an overnight cruise operator belonging to the Huong Hai Tourism Group. Its mission is to bring customers the highest level of servi...

Jasmine Cruise is one of the deluxe cruises in Halong Bay which is also the second of the famous “Three Sisters” (include Violet, Jasmine,...

With the slogan "Authentic experience", Sealife Group aims to provide attractive but also "real" experiences in the locality. The ...

We are Halong Bay Cruise Deals. We know our land Best. Let us help you!

We are always here to help you. Please kindly tell us anything about your trip: How many people, Style, Destinations, Duration, Departure date... We will send you the best offers quickly!

SEND US YOUR REQUEST